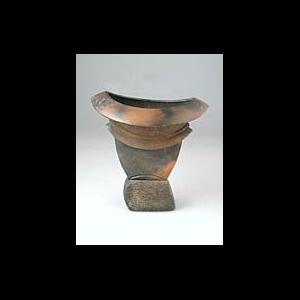 In the early 1980s Morgen attended Gray's School of Art, Aberdeen. From there she went to Wales in 1983 to study for her MA Ceramics degree in what was then the Faculty of Art and Design at Cardiff Institute of Higher Education (now Cardiff Metropolitan University). After her MA she began to exhibit widely, producing work from her studio at the Chapter Arts Centre in Cardiff. She soon had work accepted for shows in the Barbican Centre and Liberty, London, and for three years running in the early 1990s she showed at Chelsea Crafts Fair, with great success. At the Royal National Eisteddfod of Wales she won first prize in the domestic pottery section in 1986, 1987 and 1988, and again in 1990, when she was also awarded the Craft Masterpiece gold medal. In 2005 she won the Creative Wales Award, which enabled her to pursue her interest in new technology. She combined this effortlessly with traditional handcraft techniques.
Object Number: ABDRG10888