The proposal is an integration of existing elements of the site – granite walls, turntable pit, steel girder, brick vaults – with a new build, having the effect of an archaeological exploration of the city’s past. Commuters travel from lower levels up to the main thoroughfare of Union Street, while interacting with elements of Aberdeen’s history, allowing a strong, unique sense of identity to the station and the city, and re-interpreting the past feeling of occasion in travel.

The scheme also seeks to accentuate the features and release potential of the site in response to the threat currently posed to the Gardens by developers to ‘fill in and pave over’ this focal point of the city.

The area around the site of the proposed station was previously used as a siding for the main northbound line running from Aberdeen Station. It housed a turntable for moving locomotives, the pit of which is still in evidence, along with a steel girder and granite masonry wall wich support brick arch vaults. A retaining wall separates the lower part of Union Terrace gardens from the trackside, and a strip of unused land runs between them. To the south of the site is one of the pier walls of Union Street Bridge and the bracing wall of Union Street itself.

Many of these elements will be incorporated into the design of the building and will mark boundaries and form new spaces for various functions. The pier wall of the bridge will form a backdrop for the vertical circulation core, while the area under the brick vaults will house ticket machines and digital information kiosks. The steel beam will have a new access route behind, it allowing circulation from the escalators to the café, while the granite wall will form a dramatic boundary to the platform, with a new copper edged stair contrasting with the grey granite. 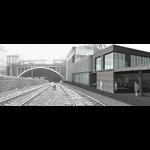 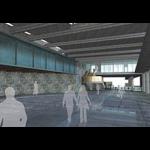 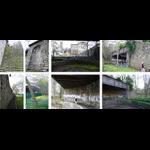